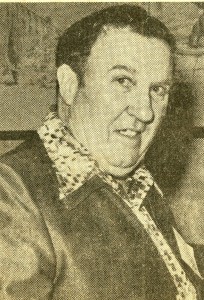 Many of us have enjoyed walking the trails or eating pancakes with real maple syrup at Troy’s Lloyd A. Stage Nature Center. Today, we would like to introduce you to Lloyd Albert Stage and to share why this beautiful Troy Parks and Recreation facility, now operated by the Troy Nature Society, was named in his honor thirty-four years ago.

Lloyd A. Stage exemplified the dedication to civic volunteering that has made Troy the outstanding place it is. He was born and raised in Royal Oak and moved to Troy shortly after he married Marion Kutasivich in 1943. At the time, Troy was not yet a city and residents had many opportunities to shape and serve the community in which they lived. Stage was a volunteer par excellence.

He was named Troy’s Outstanding Citizen of the Year in 1977 in recognition of contributions including his service as a Boy Scout leader, a member of Goodfellows and its forerunner the Metropolitan Club, and service in the Poppleton School PTA. He was a member of the Troy volunteer fire department serving at Station #3 for more than 20 years, and an auxiliary police officer for 15 years. He served on the Troy School Board between 1957 and 1969 acting as a liaison between the school board and the Troy Parks and Recreation Department, where he served on the Board for more than 20 years, chairing the board multiple times.

Stage was a long-time, hands-on volunteer in the Troy Parks as well. He helped to build the parks – designing and helping to erect the pavilion at Boulan Park and helping to fabricate metal stands for the outdoor maple sugar evaporator at the Nature Center. He even helped to maintain the parks – cleaning the rest rooms himself to ensure they were ready for children’s activities.

To honor his many years of service to the community and its parks, the City dedicated the Lloyd A. Stage Outdoor Education Center on October 4, 1981. Now known as the Lloyd A. Stage Nature Center, it still provides educational and entertaining programs in a beautiful, natural setting and depends on the efforts of a new generation of volunteers.