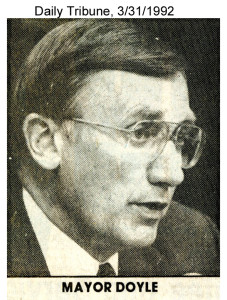 Richard “Dick” Doyle served as the Mayor of Troy from 1974 to 1992. During the 18 years that he presided over City Council, Doyle worked to maintain a non-political atmosphere. He said in a 1986 interview, “As chairman of the Council, the major contribution a mayor can make is (to) provide stability and leadership. We have maintained a relatively non-partisan Council. It’s a Council which can disagree but they haven’t taken that disagreement into personal reflection of each other. The Council has worked well together.”1

Mayor Doyle also advocated for controlled growth during Troy’s boom period. “The challenge is not to go out and attract growth. The challenge is to monitor growth. . . We don’t have to make an effort to steal development from neighboring communities, especially Detroit,” he said. 2

A native of Pittsburgh, Pennsylvania, Dick Doyle earned a BS in Chemical Engineering from the University of Pittsburgh. He was employed as a district sales manager for Hercules Chemicals, Inc., a materials supplier for the automotive industry. In addition to his outstanding service to the City, Dick Doyle was an enthusiastic supporter of recreational activities including little league baseball and football.

Mr. Doyle and his wife Louise still reside in Troy.