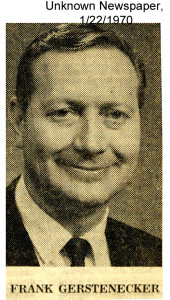 Frank Gerstenecker, Troy’s longest serving City Manager, was raised on a 200 acre farm in Troy Illinois. Following military service in the Army, he earned a BA from Southern Illinois University and a master’s degree in governmental administration at the Fels Institute of Government at the University of Pennsylvania. Mr. Gerstenecker served as the Assistant City Manager in Oshkosh Wisconsin from 1963-1965 and the City Manager of Ishpeming from 1965 to 1970. He became Troy’s City Manager in 1970. “I was looking for a new challenge and a bigger city,” he said in a 1991 interview.1

Gerstenecker arrived in Troy as the City’s “building boom” gained momentum. Between the late 1960s and the early 1980s many of the City’s major commercial and residential developments were completed. He recalled that support for development was not unanimous. “Growth versus no growth was definitely an issue and City Commission (later Council) decisions were often made on 4-3 votes. But I worked for very courageous people. They examined the issues based on facts and empirical evidence and then considered how their decisions would support the master plan. Management remained objective during the process.”

The rate of development was also limited by the completion of critical infrastructures. In 1970 the community lacked proper storm water and sanitary waste management systems. In 1971 the City also failed water pressure tests for fire suppression conducted by the Insurance Service Office (ISO). Before subdivisions and large commercial buildings were constructed, miles of underground pipes had to be laid. During the boom years 10 miles of sanitary sewers were installed every year and 55 miles of new water mains were completed within 5 years. City Management also implemented procedures to update and replace the systems. That careful maintenance plan remains in place today.

Mr. Gerstenecker was highly respected throughout his career for his professionalism, fiscal responsibility, and commitment to quality City services. “It’s exciting to me to work on the character of this community from its commercial sites to its neighborhoods. I’ve tried to make a difference. I hope I’ve made a difference.” he said.1

Following his retirement after over 25 years of service, Mr. Gerstenecker served on the International City and County Management Association Executive Board and provided consulting services to other municipalities. In 2001 he received the John M. Patriarche Distinguished Service Award from the Michigan Local Government Management Association.Frank and his wife Janet continue to make Troy their home. “This is a wonderful place to live,” he said recently, “We travel south in the winter but are always anxious to return to Troy.”