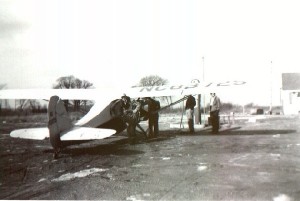 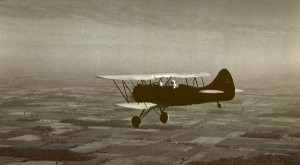 Milton Berz Sr would have told you that it takes a combination of dreams, circumstances, and hard work to build a successful airport. Milton “Pappy” Berz learned to fly in a Curtiss Jenny during World War I. In 1924 he and two friends organized a flying enterprise at the Michigan Fliers Field on Southfield Road at 9 Mile, but the business failed. In 1945 Pappy purchased 145 acres on Coolidge Road between 14 Mile and Maple Roads in rural Troy Township. During an airplane dealer’s meeting, he registered his property under the name “Berz Airport.” Soon afterward, he began receiving mail under that name, decided to “move some planes there,” and became licensed under the GI Bill. A cement block hanger was built in 1946 to shelter 14 planes.

Berz Airport was a family business for many years, with Pappy and his wife Dorothy fueling planes and doing paper work. Milton Jr. gave flight instructions and Milt Jr.’s wife, Mary Jane, answered the phone and did other chores. Pappy’s other son, Theodore, became a flight instructor, too. Daughters Julia and Emily got their private pilot licenses and assisted wherever they were needed. The family provided flight instruction, a taxi service, did aerial photography, and performed stunts. Eventually the airport had two paved runways, numerous hangers, and was the home base for 115 planes.

In later years, Pappy turned over the airport’s operations to his son, Milt, who now operates the Berz Airport in Macomb County. Theodore became a professional pilot and flew commercial airplanes. A third son, George, was killed on June 7, 1964 when his plane went down on Adams Road near Long Lake during a test flight with the Birmingham Fire Chief.

In the late 1960s the Berz Airport in Troy was sold to Rockwell International. It was sold again in 1979 to Oakland County and continues to operate under the name Oakland- Troy Executive Airport.

Preparing for flight at Berz Airport