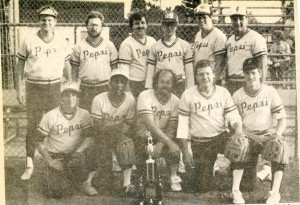 In late April 1986, over two thousand adult players came out for the softball season in Troy. That year four new ball diamonds opened in June at “Section 1 Park”. The ball fields at the site, which was renamed Flynn Park, are still used by softball leagues.

The leagues included nine classes for men, four for women, and one co-recreational league. Many of the teams were company-sponsored, including the 1985 Class D champions, supported by Pepsi-Cola, and teams from Kmart, Kelly Services, Marinelli’s, Bayliss Tire and Service, The Gathering Place, and the Troy-Somerset Gazette.

Stu Alderman, Troy’s supervisor for softball programs, said that “Besides working together, they play together. It’s common to see friends who play on the same team for years. Very seldom are there teams that don’t have common friends or co-workers. Frequently teams go out after playing their evening games to continue their socializing.”

Some of the teams fielded in Troy were eligible of the American Softball Association tournament held at the Canton Center in August. In 1986 there were about five thousand ASA-registered teams in Oakland, Wayne, Macomb, and Livingston counties, and about as many around the rest of Michigan.

Source: Bishop, Sue. 1986. From T-Ball to the Fierce Competition of Corporate Rivals, It’s Time to Play Ball!!! Troy-Somerset Gazette, May 26.