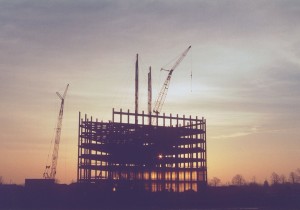 Our readers are invited to join Celebrating of Excellence: 60 Years of Growth in Troy and the Big Beaver Corridor on April 21 at Huntington Bank, 801 Big Beaver Road, 5:30-7:30 pm. For registration information please go to www.troyhistoric village.org.

A number of consultant studies provided planning guidelines for the transformation of the open fields along Big Beaver Road into an impressive commercial corridor of high-rise office buildings, restaurants, and the Somerset Collection. Max and Phillip Stollman of Biltmore Properties, along with Norman Cohen and Sam Frankel began construction of the Somerset Apartments in 1964 followed by Saks Fifth Ave (1967), Bonwit Teller (1968), and the original stores of Somerset Mall located on the south side of Big Beaver.

“We were pioneers,” remembered Norm Cohen. “We built apartments before anyone had heard of Troy. Cows were grazing across the street from Saks Fifth Avenue the day the store opened.” Those dairy cows were owned by the Brooks Farm. Their original fieldstone farmhouse and reassembled outbuildings are now connected by a modern green building completed in 2006. This complex of new and old structures serves as the headquarters of the Kresge Foundation.

It took a decade (1986-1996) and a number of court ordered consent judgements to finalize an acceptable plan for “Somerset North” and the completion of the Somerset Collection as a premier shopping attraction. Much of the controversy was focused on an appropriate buffer between the proposed mall and the residential homes to the north. The approved plan ultimately provided for a denser development on the original acreage and the construction of the dramatic skywalk over Big Beaver Road that connects the south and north sections of the mall.

“Millions of square feet of offices were also built (along Big Beaver),” recalled former City Planner Larry Keisling. “It happened in 10 year pieces. A major development was built, and then construction would slow down while that building filled up. Then there would be a new period of development.”

Robert Sosnick (Redico) was a principal in the development of the 25-story Top of Troy (1975), the City Center Building, Troy Office Center, and the SBC (Ameritech) Building. Alan Kiriluk (Kirco) built the elegant Columbia Center on the southwest corner of Big Beaver at Livernois while Michael Kojaian and his partners built the Liberty Center on the northwest corner of the same intersection. Automation Alley, constructed in 2004 on the site of the old Big Beaver Airport, is one of the more recent developments along the corridor.

Learn more about these developers and other businesses along Big Beaver in future 365 Stories.

Photo: Top of Troy under construction