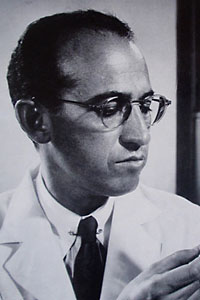 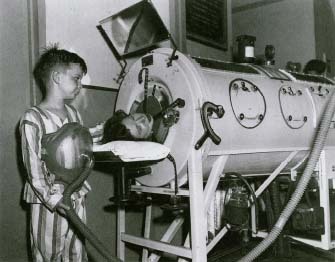 Polio was one of the most feared viruses in the history of mankind. Scientists believe that the virus has been around for thousands of years, but epidemics did not occur until the 20th Century. From 1916 until the late 1950s, at least one polio epidemic occurred in the United States every year. Those who contracted polio were often paralyzed from the waist down and in very severe cases their breathing was severely affected to the point of needing life support. While the most famous case was Franklin D. Roosevelt, who contracted polio as an adult, the disease increasingly became known as a children’s virus. By the 1950s, polio was considered one of the most serious communicable diseases among children. In 1952, 60,000 children were infected with thousands paralyzed and over 3,000 fatalities. Often times when confirmed cases were announced, thousands of people would flee the area. Public gatherings almost entirely ceased.

Between 1917 and the 1950s, several treatments were proposed. One treatment that saved thousands of lives was called the iron lung. The change in pressure inside a metal tube in which a person’s body was placed mimicked normal breathing patterns. Locally, the Troy Volunteer Fire Department raised funds to purchase a portable iron lung. It was used as an educational tool in the school system and to facilitate the breathing of a local boy whose own equipment needed service. One of the firemen recalled his impression of the iron lung: “It was just like these plastic eggs that you put together. It looked like 10th century armor. You rolled [the patient] over and put the back shell on, laid them on that, and then put the front shell on.” Iron lungs were cumbersome to store, very expensive, and did nothing to cure the disease.

Scientists were desperate to find a vaccine. Dr. Jonas Salk, who completed postgraduate training at the University of Michigan, joined the fight in 1948. Salk concentrated on a “chemically killed virus,” which primes the immune system to recognize the virus and eliminate it while also giving long lasting immunity. The 1954 field trials of the vaccine were led and evaluated by Salk’s former University of Michigan mentor, Dr. Thomas Francis, Jr. Over 1,800,000 children participated in the trials. On April 12, 1955, in front of a crowd of scientists and reporters at the U of M Rackham Auditorium, Dr. Francis announced the findings with this statement: “The vaccine works. It is safe, effective, and potent.” Dr. Salk became a national hero. Mass immunizations in the coming years resulted in a rapid decline in the number of cases. By 1961, only 161 cases were recorded in the United States. A few years after that, what had quickly become the most feared disease in the country had been eliminated.

by: Condensed from an article by Craig Hutchison