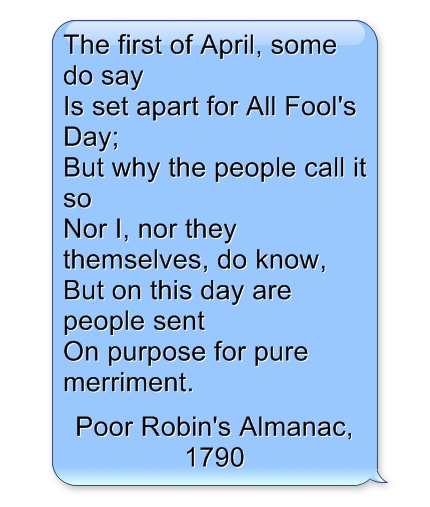 Throughout the United States, Canada, and Europe April 1 is recognized as April Fool’s Day. While there are lots of interesting theories regarding the origin of this day of pranks, all have been discounted by historians. The only undisputed fact is that across the globe, it’s a day for playing tricks and revealing the gullible side of human nature. The following are a few classic April Fool’s hoaxes that caused no serious harm beyond sore sides from laughing really hard.

In 1996 a full page ad in the New York Times announced that Taco Bell had purchased the Liberty Bell and renamed it the Taco Liberty Bell. Funds from the sale would be used to reduce the national debt. When White House Press Secretary Mike McCurry was asked to comment, he replied in the spirit of the day that the Lincoln Memorial had also been sold and would be renamed the Lincoln Mercury Memorial.

In the 1960s only a few people had invested in color televisions. So April 1, 1962 announcers on Sweden’s only television channel told their viewers to tape pieces of nylon stockings over the screens of their black and white TVs. The fabric would bend the light and they would see the programs in color. Bits of thousands of stockings were found in the trash on April 2.

The BBC is credited with one of the finest April Fool’s tricks in 1957. They reported that due to a mild winter in Switzerland and a lack of natural pests the country had experienced a bumper crop of home-grown spaghetti. The BBC told hundreds of viewers who inquired about growing their own spaghetti plants that they should stick a piece of spaghetti in tomato sauce . . .

We are confident that Troy residents and creative minds in our region have played April Fools jokes that rival these in originality and humor. Please email the best trick you have played, or the finest prank played on you to ed@thvmail.org or reply on Facebook. We will print the best submissions on April 2.