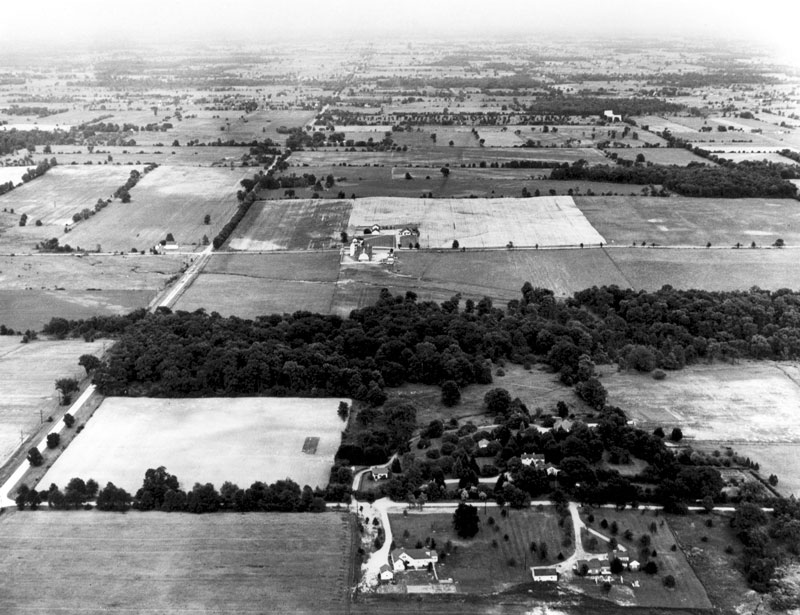 Looking east circa 1955 along Long Lake Road (left side of image) at Beach Road (bottom of the image.) Hilly Acres Dairy is in the middle of the photo. Find the mausoleum at White Chapel Cemetery in the upper right portion of the photo.

In 1956 the City of Troy retained the planning services of Vilican Lehman Associates to complete a series of studies for incorporation into a master plan for development. George Vilican was the Master Planner for the City of Detroit Planning Commission, and Chuck Lehman served on that same commission as a Senior Planner. Their firm provided planning analyses, landscape architecture designs, and urban and community designs for cities in the Detroit Metropolitan area. The City of Troy asked George Vilican to develop a zoning ordinance.

Between January and March 1957, Mayor Frank Costello presided over four public hearings where hundreds of irate citizens voiced their objections to the zoning map and ordinance proposed by Mr. Vilican. Some newspaper accounts suggested over one thousand residents attended the first meeting. Subsequent hearings were held in the high school gym to accommodate the hundreds of citizens who wished to voice their concerns.

Many residents objected to changes in zoning for residential or commercial properties they owned, and that the current uses of their properties would be considered non-conforming. Further, they would be restricted from remodeling, expanding, or rebuilding if 60 percent or more of their structure was destroyed. Others objected to any new commercial zoning adjacent to residentially zoned areas. Some residents did not want any zoning ordinance and preferred that the city develop without restrictions. Norman Barnard led a large group of citizens who bitterly protested that the ordinance did not include agricultural zoning.