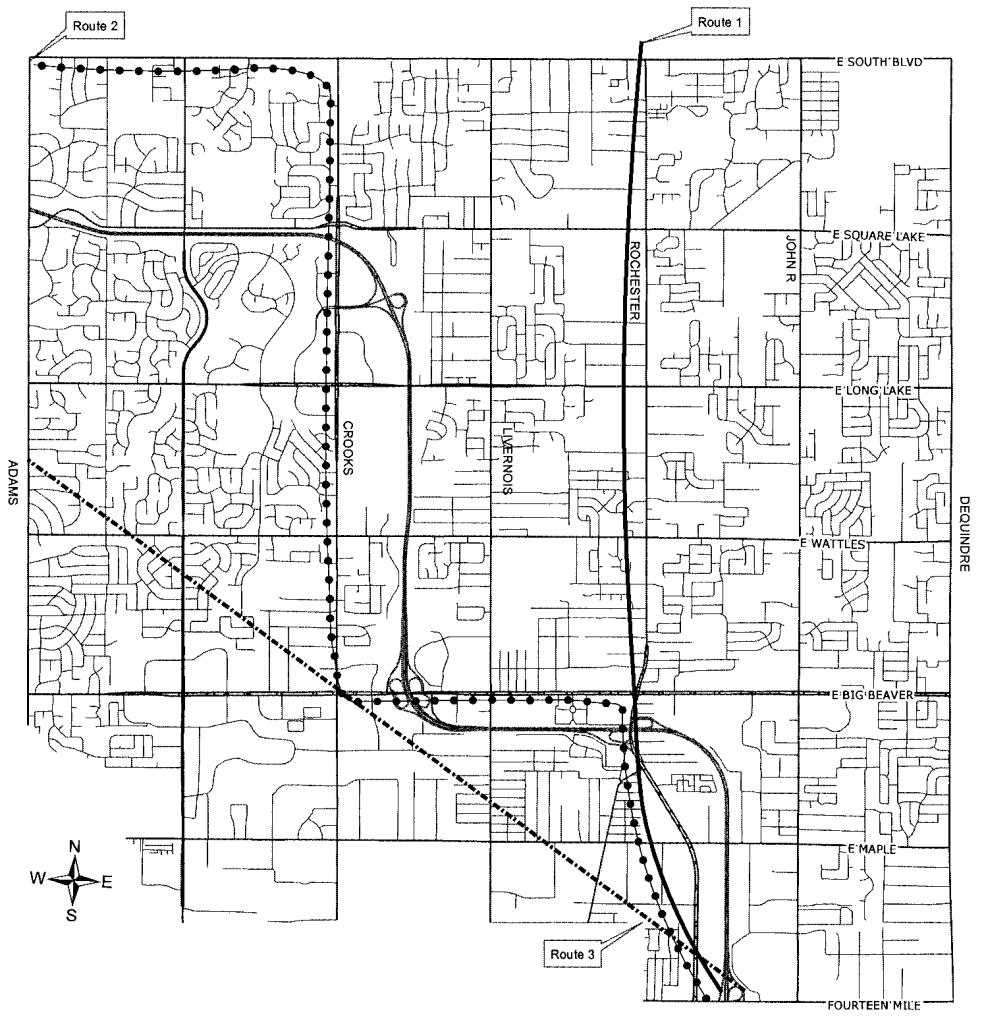 There are two nearly 90-degree turns in I-75 in Troy. The following explains why this circuitous route was selected.

Route #1 was quickly eliminated because plans to install the Twelve Town Drain near Rochester Road made freeway excavations in that area infeasible.

While Route #3 was direct and more economical to construct, City Planner George Vilican argued that the diagonal route had long term hidden costs because it decreased property values. He argued that the route created a number of triangular parcels that were too small to allow adequate residential development in an area planned and zoned for the highest category of single-family residential use.

Route #4, Vilican continued, did not bisect the city or Residential Planning Units, nor did it create unusable oddly shaped parcels of land. The “stair step” route fit into Troy’s Master Plan and delineated and separated the City’s proposed Residential Planning Units. In addition, the portion of I-75 that paralleled Big Beaver Road provided convenient access to that portion of the city zoned for light industrial and commercial development. Vilican also maintained that Route #4 provided access to the 1,700-acre site along Long Lake Road at Crooks then owned by Chrysler Corporation. It had been suggested that Chrysler might develop the site into a massive research facility with 8,000 to 9,000 employees. Immediate access to I-75 was important for daily commuters.

George Vilican and his firm emphatically endorsed Routes #4 and #5 but preferred Route 4 with its unique nearly right angle turns. Some in the Highway Department dubbed the unprecedented design the “Vilican Lehman Folly.” However, Vilican maintained that the route provided the best integration of the Master Plan and the concept of discrete Neighborhood Planning Units and that it enhanced long-term property values.

Both Routes #4 and #5 conformed to the requirements outlined by the Federal Interstate and Defense Highway System and the standards prescribed by the City of Troy Master Plan. On January 14, 1959, in a 4-2 vote with one absentee, the City approved the selection of Route #4, also known as the “Southern Route.”