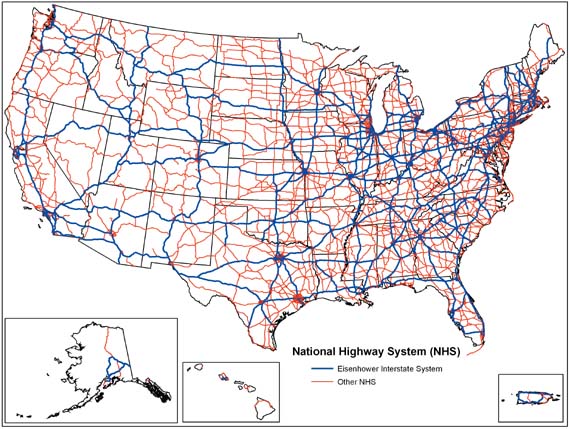 The Interstate Highway Act, signed into law on June 29, 1956, was a major achievement of the Eisenhower administration. The President’s first term was focused on negotiating an acceptable compromise between special interest groups and the critical need for a modern, efficient interstate transportation system. The final bill provided for the construction of a 41,000-mile system (later increased to 45,000 miles), financed almost entirely with federal funds (90 percent). The system addressed critical issues:

Equally important, new limited access expressways had an enormous effect on aging industrial cities and new suburban communities. Shortly after the bill was signed into law, urban architect Lewis Mumford wrote, “When the American people, through their Congress, voted a little while ago for a $26 billion highway program, the most charitable thing to assume is that they hadn’t the faintest notion of what they were doing.”

Interstate highway routes determined the future of many communities. Towns on old highway routes languished or disappeared when the new expressways bypassed them. Communities like the City of Troy that were located along the new right-of-ways flourished. Finally, interstates that were designed to make the big cities more accessible also provided convenient exit routes.

Chuck Lehman, a Senior Planner for the City of Detroit and the City of Troy stated: “We all thought that the expressways would bring traffic into Detroit. They would make it easier for workers and businessmen to get into the city. None of us thought that they would do the opposite. They actually were the roads out.”