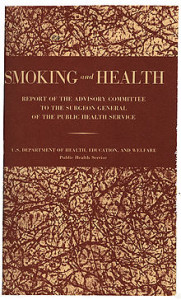 Dr. Luther L. Terry MD, a cardiovascular physician, was appointed Surgeon General by John F. Kennedy in 1961. In January 1964 Dr. Terry released the first Surgeon General’s Report on Smoking and Health.  The report, based on the extensive research documented in 7,000 articles in biomedical publications stated that cigarette smoking was:

The report made headlines across the country and was the first of many steps to educate the public regarding the dangers of smoking and to encourage people to kick the habit. In June of 1964 the Federal Trade Commission voted 3-1 to require cigarette manufacturers to place a warning on each pack of cigarettes that smoking was dangerous to health.  Four years later the Public Health Cigarette Smoking Act of 1969 was passed. This legislation required additional health warnings on cigarette packages and banned cigarette advertising on television.

On January 11, 1964, Luther L. Terry, MD, Surgeon General of the U.S. Public Health Service, released the first report of the Surgeon General’s Advisory Committee on Smoking and Health. Click below to view the video: