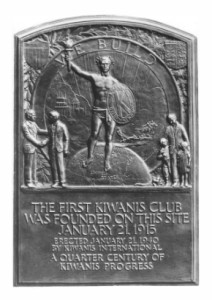 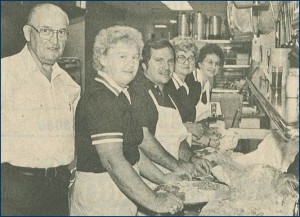 Kiwanis International is celebrating its 100 year anniversary in 2015. The first club was organized by Joseph Prance and Allen Browne in Detroit, Michigan in 1915as a fraternal club for businessmen. The original name of the group, the Supreme Lodge Benevolent Order Brothers, quickly gained the nickname BOB and within a few months was changed to Kiwanis. Various translations of the Native American word were cited including, “We trade” and “We have a good time- We make noise.”

However, in 1919 the organization changed its focus to service and in 1920, Roe Fulkerson, the editor of the Kiwanis magazine, proposed “We Build” as the organization’s new motto. Today, more than 600,000 Kiwanis-family members in 96 countries make their mark by responding to the needs of their communities and pooling their resources to address worldwide issues. Through these efforts, Kiwanis International truly is “Serving the Children of the World.”1

The Troy Kiwanis Club was established in the early 1970s by prominent local businessmen. Their weekly lunch meetings feature informative and inspiring speakers. This vibrant club still meets weekly on Tuesdays at Maggiano’s Little Italy. Over the years, the Troy club has hosted numerous fundraisers including dinners, auctions, and wine tastings. They have awarded college scholarships to Troy students and donated over $400,000 to the Troy Boys and Girls Club.

To commemorate the City of Troy’s 60th Anniversary in 2015, we will publish a different story each day that highlights a person, discovery, or event that occurred locally, regionally, nationally, or even globally between 1955 and 2015 and that helped shape our lives and our community. We will try to post stories on important anniversary dates, but we also realize that dates are less critical than content and context. We will include the facts related to controversial stories, allowing our readers to form their own opinions. We invite you to read and comment on the stories. Your suggestions for topics are also welcome and can be posted on our Facebook page. You can also email stories or ideas to the 365 Story Editor at ed@thvmail.org.